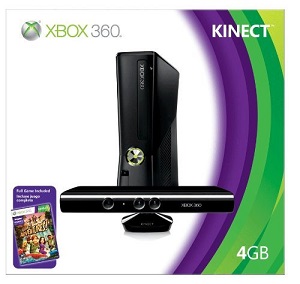 Gaming fans have long debated between the particular merits of their favorite console compared to their competitors. While the Xbox 360 and PS3 fans could point to processing power, gameplay and titles specific to each, the main selling point of the Wii was its unique playing style and fun game titles.

However, with the introduction of the PS3 Move and the Xbox Kinect, Nintendo no longer have the monopoly on movement based controllers. Whereas the Wii and PS3 Move are both controller based systems, the Xbox 360 Kinect takes it one step further by entirely removing the need for controllers.

The Kinect Sensor employs full body tracking software that recognizes and mirrors your actions on the screen, making your whole body the controller. Games are played through whole body movements, while menu pages are navigated with a flick of the hand or through spoken commands. The Kinect has certainly raised the bar when it comes to motion sensor computer gaming, but does it actually work as a console or is the Kinect simply a demonstration of what is possible?

Easy to Use: The Xbox 360 Kinect Bundle comes with an Xbox 360 4GB S Console, a wireless controller, the Kinect Sensor and the Kinect Adventure game. The whole console is extremely simple to set up and comes with easy to follow instructions. Once the console and Kinect Sensor are set up, the console is ready for use. Controlling the machine is very simple, and players can use voice commands, hand movements or the wireless controller to navigate the menus.

The fun really starts when you start a game of Kinect Adventures – the games are all simple to play, and although there is a learning curve where players need to get used to moving their own body to control their character on screen, basic competent instant play can be expected. Unlike the Wii and PS3 Move, there are no controllers or buttons to get used to, and players can focus entirely on themselves and the screen.

Fun: There is no getting away from it – the Xbox Kinect is tremendous fun. Unlike most computer games where everyone’s attention is focused on the screen, the control system of the Kinect gives bystanders a choice of things to watch; the screen or the player!

While the on-screen activities that can be found on the included Kinect Adventures game are engaging and fun, it can be very easy to forget about the players progress and get completely engrossed in their movements and attempts to control their character. The Kinect is great fun to play on your own, as the style of gameplay is extremely rewarding, but the real fun undoubtedly starts when you have several players and an audience to boot! This is a family console through and through.

Built In Wi-Fi: The Xbox 360 Kinect Bundle comes equipped with built in Wi-Fi that allows for instant connection to Xbox Live. Xbox Live not only allows players to play online against other players around the world, but it allows users to stream HD movies and TV shows on Netflix, download games or game upgrades and even connect with Facebook and Twitter. The Xbox 360 is a social and media play-centre that can quickly become one of the most used devices in the home.

Space Restrictions: Microsoft claim that the Xbox 360 Kinect works with a minimum of 6 feet of space. While the Kinect can perform some operations at this distance, it is far from ideal and not consistent. Buyers should ensure that they have a minimum of 8 feet and preferably ten feet of space, as anything less than this could very easily result in disappointment.

Many of the movements and controls on the Kinect require quite a bit of movement, and these movements can bring you too close to the sensor if you don’t have enough space to begin with. This space restriction is not clear and obvious when buying, and Microsoft should make more of an effort to ensure that perspective buyers are aware of this.

Hard Drive Space: The Xbox 360 Kinect Bundle comes with 4GB memory, and this could be quite small for previous owners of the 250GB hard drive model. It should be noted that this 4GB Xbox does facilitate downloads and saves to USB flash drives, supporting up to two 16GB flash drives. Loading from the flash drives is quicker and smoother than loading from a hard drive, but even so 36GB may be too small for those who enjoy downloading large amounts of content.

Is the Xbox 360 Kinect Bundle Worth Buying?

The Xbox 360 Kinect Bundle is a fantastic concept and an extremely fun console, but it’s not for everyone. Serious gamers will not be taken with the control system, and the range of games available reflects this. The Kinect is supposed to be fun, and that’s exactly what it is. Perfect for families or for parties, the Kinect is definitely something that works best when used with others.

The space limitations are disappointingly hidden in Microsoft’s literature, and claims of only requiring 6 feet of space are misleading. Anyone in a small apartment or that is hoping to use the Kinect in a child’s bedroom will probably find that they simply don’t have enough room for the Kinect to work properly.

That being said, if you do have the space, this is a wonderful machine. Far more immersive than other motion sensor devices, the Xbox 360 Kinect Bundle is fun for all the family, and it is certainly far more than just a novelty.