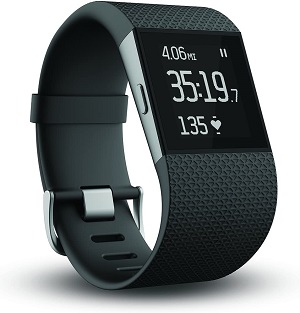 Fitbit built a reputation as a provider of quality wrist fitness monitors, but with the Fitbit Surge Fitness Superwatch they have made the jump to full on smartwatch. Compatible with over 120 smartphones via Bluetooth technology, the Surge is not just any smartwatch, but a fitness super watch.

Boasting features such as constant heart rate monitoring, built in GPS, automatic sleep detection and a silent alarm, the Fitbit Surge serves a dual purpose. On one hand, it works as a functional smartwatch that can keep you connected with your phone, notify you of calls and texts and even control your music.

On the other hand, the Surge allows you to set workout goals and monitor your progress. In this way, the Fitbit Surge gives users real time information that makes workouts both more rewarding and more efficient.

Is the Fitbit Surge Fitness Superwatch Worth Buying?

The Surge is beautifully designed. Wearing smartwatches takes some getting used to for most people – those with big functionality come with big watch faces. That being said, the rubber strap is comfortable to wear. It is also reasonably straightforward to use – changing settings and modes is intuitive and simple, allowing users to avail of all the available features.

While it is advertised as having a 7 day battery life, that is definitely optimistic. Most users report that an average battery life comes in around the 4 day mark. That being said, charging is hardly an ordeal; the Fitbit Surge fully charges within 2 hours. The built in GPS feature is also completely functional. Smartphone GPS systems will always struggle in highly built up areas, but when used out in the open, the Surge can fairly accurately track your route, position and distance covered.

One aspect of the Fitbit Surge that has drawn conflicting reports is the heart rate monitor. Traditionally, wrist mounted heart rate monitors are notoriously inaccurate. During times of rest or gentle activity, the Surge is quite decent. When compared to chest based heart rate monitors, the results are fairly close to each other. However, some users have expressed disappointment in the Surge’s heart rate monitoring during strenuous exercise. The Surge often needs to be tightened before a workout, and some users reporting increased accuracy by wearing the Surge further up their arm than would be normal.

Overall, the Fitbit Surge Fitness Superwatch is a well-made smartwatch with some exceptional features. Buyers looking for a heart rate monitor that will offer precise accuracy during heavy workouts could be left disappointed as the Surge can struggle during these times. However, for tracking lighter workouts and as a general day to day smartwatch, the Surge is a welcome addition to the market.