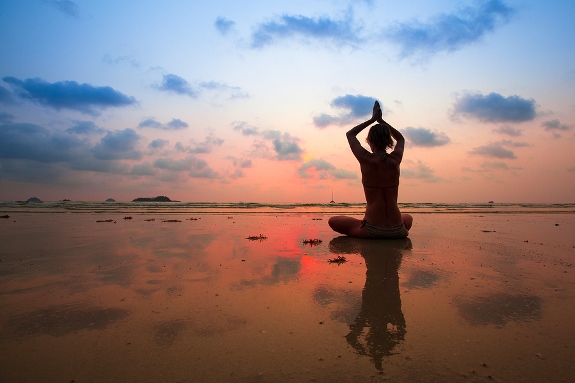 Before answering this question, we have to look back at the origin of the word “yoga” itself. Thought to be a derivative of “yuj” from the ancient East Indian Sanskrit language, the root word translates to yoking – as in hitching a team of oxen to a yoke. Yoking further suggests a union of two animals connected together as one.

So in essence, yoga is the union, or connecting together, of the mind, body and spirit. But, how does yoga connect the two non-physical elements to the physical one? Generally through a series of poses or postures, breathing and meditation, although some styles also include chanting and the reading of inspirational passages.

The Physical Side of Yoga

Yoga develops strength, flexibility and stamina through its poses. If done in quick succession, as with Ashtanga, Bikran and Mosha, yoga can be a mild low-impact type of exercise that builds stamina. If done more slowly, as in the styles of Anusara, Iyengar and Viniyoga, the focus is on doing the pose correctly. Because most of the styles use the same poses or postures, which style you choose depends on what physical aspect you want to get out of the practice and in large part, how your instructor was trained.

The Mental/Spiritual Side of Yoga

Yoga styles, such as Jivamukti and Kundalini include call and response chanting. Other styles may include mediation, a focus on breathing or the reading of inspirational passages called aphorisms. Many that practice yoga find the performance of poses first provides an easier transition to the meditation portion of the experience.

Yoga is non-competitive and highly personal, making it a good sport for those liking individual sports and wanting to get in touch with themselves. It is a way to shut out the outside world and focus on just oneself; during your yoga practice, you are disconnected from the real world. No cell phones ringing, no distractions from people, no mind wandering and losing focus. It is all about just you.

When first starting out practicing yoga, join a class first to learn the technique of the postures and whatever else that is part of that style yoga. Also, do not be afraid to try other styles as the first one you choose may not provide what you are trying to get out of it. In this fast and connected world that we live in, making time for the introspection of oneself can be difficult; practicing yoga on a regular basis is one technique to get back in touch with yourself.